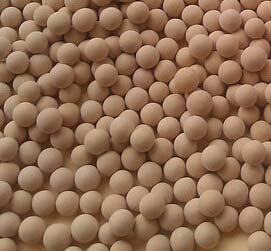 Our company shares glorious credentials with the proficient Manufacturers, Exporters & Suppliers of Molecular Sieves. These are widely used for drying gases and liquids, cleaning technical gases, petrochemical and natural gases and oxygen production. Our Molecular Sieves 3A, 4A, 5A, 13X are available in high quality packaging and at very nominal rates. We are capable of undertaking both bulk and urgent orders.

More About Molecular Sieves :
Molecular sieves are a synthetically manufactured version of Zeolite and feature an intricate network of pores and empty cavities, giving it exceptional adsorbing properties. While a molecular sieve has the fastest absorption rate among desiccants, it is also costlier than other desiccants. It is usually drawn from sodium potassium or calcium alumina silicate and is available in a desiccant pack. Molecular sieves have an opaque pinkish appearance and come in the form of beads. Molecular sieves absorb matter up to 22% of their own weight. Hence they can either be used by themselves or be blended with other desiccants to expand their area of application. They have the capability to bring down the relative humidity to as low as 10% when used in proper packaging.

Long known for their drying capacity (even to 90°C), molecular sieves have recently demonstrated utility in synthetic organic procedures, frequently allowing isolation of desired products from condensation reactions that are governed by generally unfavorable equilibria. These synthetic zeolites have been shown to remove water, alcohols (including methanol and ethanol), and HCL from such systems as ketimine and enamine syntheses, ester condensations, and the conversion of unsaturated aldehydes to polyenals.

TYPE 3 A
Desiccation  of  petroleum cracking  gas and alkenes, selective adsorption of H2O in  insulated glass (IG)  and polyurethane
Considered a general-purpose drying agent in polar and nonpolar media.

TYPE 4 A
Preferred for static dehydration in closed liquid or gas systems, e.g., in packaging of drugs, electric components and perishable chemicals; water scavenging in printing and plastics systems and drying saturated hydrocarbon streams. It shows exceptional absorption properties for water, carbon dioxide, SO2, H2S, C2H4, C3H6 among some other gases. It is used extensively as an absorption material for carbon dioxide.
Generally considered a universal drying agent in polar and nonpolar media.

TYPE 5 A
Desiccation and purification of air;  dehydration  and  desulphurization  of natural gas and  liquid petroleum gas;  oxygen and  hydrogen  production by pressure swing adsorption process Molecules adsorbed include nC4H10, nC4H9OH, C3H8  to C22H46, and dichlorodifluoro-methane.